David Cassell delves into the company archives once again

If you mention the name Marley to people of a certain age, many of them probably won’t automatically associate it with the roofing systems that we manufacture and sell today. Apart from those who mistakenly assume we’re talking about a Jamaican reggae superstar, many of them will recall Marley products from the past, particularly floorings, plastic guttering and drainpipes, coal bunkers, folding space saver doors, carpets, plastic handrail, adhesive flexible surfacings, and concrete garages. It’s highly likely that some people will also recall buying those products from their local Marley shop! Yes, Marley had shops!

In a previous ‘From The Archives’, we met Sir Owen Aisher, the man who dominated Marley for over half a century, and we learned of his philosophy that ‘if you wanted to sell a new product you had to go out and sell it yourself’. By the late 1950s, Marley’s product range had grown significantly. The Marley ‘supply and fix’ contracting operation was well established to supply products to builders. Sir Owen decided that Marley should also sell their products direct to the public via their own shops. The shops should have a comprehensive display of all the types of products manufactured. Supply and fix orders were also taken, and product information and literature were readily available from the shop manager and his staff. The shop would also act as a distribution point for other local stockists too.

Marley opened its’ first shop at 29 London Road Southampton on 2nd July 1959, and we have a photo of it in our archives over to the right >>> 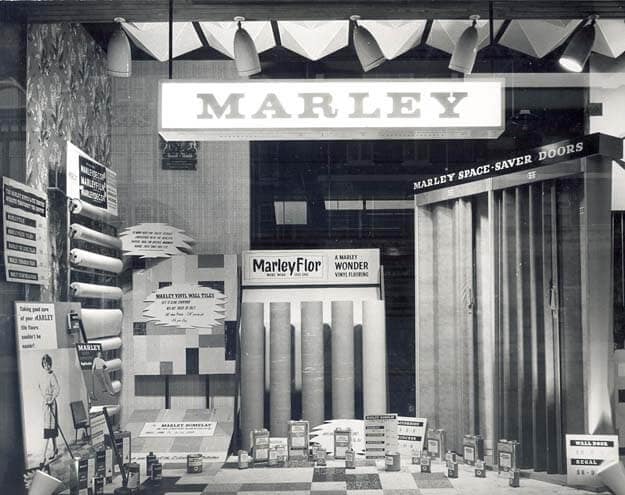 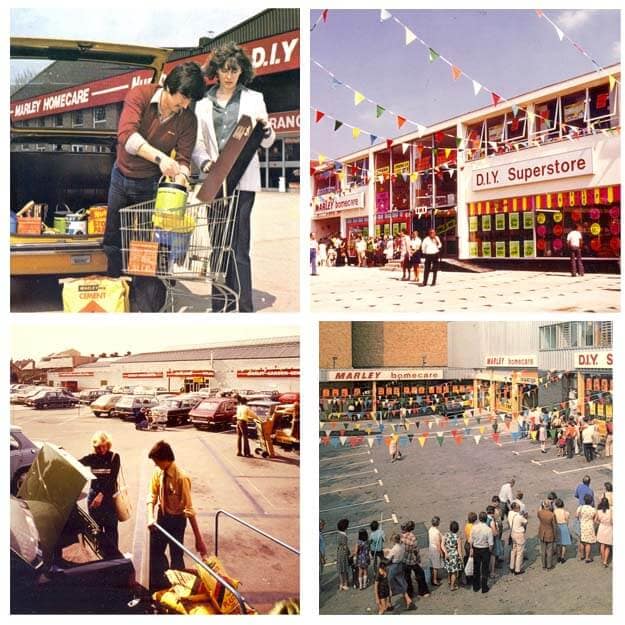 The second shop to open was in Bristol. Early attempts at retailing weren’t too successful, until Marley employed an ex-Woolworth’s manager called Tom O’Sullivan who built the retail business up to be one of the largest in the country. By 1964 there were 60 shops, and by the end of the 1960s there were 184 shops. Remember that this was at the time when home ownership (rather than renting) was becoming popular in the UK. Many people aspired to own their own home, and to decorate and furnish it to their own tastes.

The concept of ‘do it yourself’ (DIY), rather than employing a tradesman to do the work, became popular and the Marley shops were the ideal place for Mr & Mrs Public to go. They were very much showrooms rather than just shops, but the premises were quite small. Remember that Marley was a global business by now, and shops were also opened in Germany, Belgium, Austria, South Africa and New Zealand, though some were more successful than others.

The 1970s brought a crucial change in strategy, with a swing towards larger sized stores, called ‘Marley Homecare’. There was also a change in philosophy on the product range, with non-Marley-manufactured products being added, such as wall tiles, wallpapers, paints and ceiling finishes. (We have some Marley-branded polystyrene ceiling roll and coving in our Museum at Burton, that would have been sourced from another manufacturer). The experiment worked and Marley moved from being a High Street distributor of its’ own products to an independent retailer. The opening of a new ‘Marley Homecare Superstore’ was a big occasion, and photographs in our archives show that large crowds often formed on opening day to take advantage of the special offers. During the 1970s, Marley closed 150 smaller shops and moved into much bigger ‘Superstore’ premises. By 1980, Marley’s own products had fallen to around 15% of retail sales.

Marley staff were entitled to a ‘staff discount’ when making purchases from the shops. They had to produce a written ‘letter of authority’ from their manager to do so. That changed in 1981 with the introduction of the ‘Marley Staff Discount Card’, which was plastic and the same size as a credit card. At the time I’d just bought my first house up in Yorkshire and often used my card (which is now in the archives at Burton) to make purchases from the Marley Homecare store in nearby Bradford. Unfortunately, the staff weren’t sure how to process it and a queue of frustrated customers often formed behind me at the checkout, much to my amusement!

By the 1980s, Marley faced intense competition in the DIY retail market. One of the competitors had been started by two ex-senior managers who learned their trade at Marley, named Black and Quayle. Sound familiar? Yes, that’s right……B&Q! In a radical change to attract new customers, the Marley name was dropped, and the 65 remaining stores became known as ‘Payless DIY’ from 1982 onwards.

During the past few weeks we have been contacted by 2 people with memories of the Marley shops. Mr Alan Hill was employed at the Marley shop in Lichfield, just down the A38 from our Burton factory in the 1960s. He remembered going out to customer’s homes to measure and then quote for fitting carpets. He drove a red Marley Ford Transit van which also advertised this service, and he was delighted when we gave him a photo of one of these vans that we had in our archives! We also heard from Mr Trevor Baker, whose father was recruited as manager of the Marley store in Northampton (the 50th one to open) in 1963. He then became a District Manager, which included shops in Scotland and Northern Ireland. He said that his father ‘loved working for Marley, as they were an excellent employer, fair and good to the staff’. 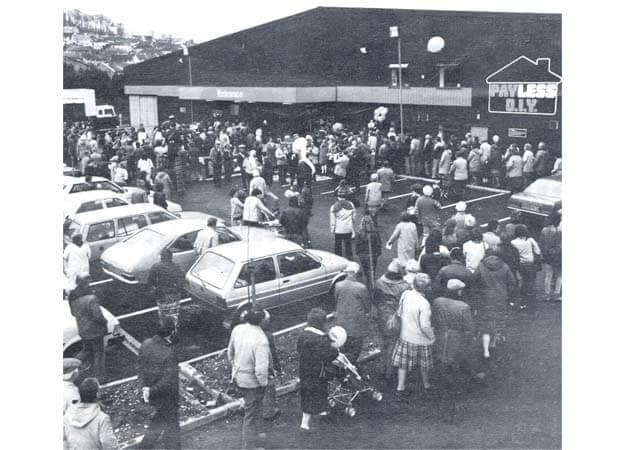